Lee Carlon has collected some of his short stories into a quick Kindle read, and offering them as a free or ridiculous 99c fee, or it may even have been free. Lee Carlon writes sci-fi, so all these snippets are in that realm. They are short and NOT sweet but with a little bite at the end, most of them guaranteed to give you a chuckle or a what-the moment.

I liked all the stories, but Skin Deep and Penalty Rates brought more than a chuckle, with Lee revealing a wicked sense of irony that laughs at people’s pretensions. But read all seven little storylets and decide which one is your favourite.

Richmal’s Crompton’s totally delightful rascal William has finally entered the public domain, enabling new generations of readers to revel in his complicated boyhood pranks. I was delighted to find it as a free Kindle download that I ‘bought’ for the huge sume of $0.00!

I like the new trend of shorter stories that you can read on your Kindle, smart phone or e-reader. More William has the usual style of shorter stories, each episode covers one of our intrepid William’s exploits. I read it across both my Kindle ( one of the very early ones that I have no need or intention of replacing) and my Samsung Galaxy S3. There are fourteen stories in which William variously liberates cakes and desserts, arrests smugglers, rescues damsels in distress and inadvertently aids a burglar all with hilarious results.

Although William’s adventures are frequently the cause of much chaos, William always firmly intends to do good, and frequently does..like William’s Christmas Eve, in which he simultaneously disposes of a forced Christmas party, and provides a treat for a family that really needs it. In Ancient Souls, William rescues the hapless Mr Lambkin from the clutches of Miss Gregoria Mush. William’s antics shine a relentless light of childhood incredulity at the ridiculousness of adult hypocrisy and weakness. 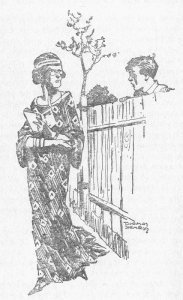 If you need a pick-me-up to cheer yourself up, and you dont mind being reduced to helpless giggles on the bus, go on and download it and read it! The only problem was that the Kindle edition didn’t show the pictures, and those are a great part of the book, if only for William’s expressions. It’s a great pity that these books are no longer in print, but as some come into the public domain.  Thanks to the internet I was able to research Richmal Crompton and discover that she is a woman..all my life I assumed that the author was a man, now I wonder how I ever thought that! It would be a great pity if her works were forgotten, children need William more than ever today!

You can also download the book from Project Gutenberg, where the images are available. Unfortunately, this seems to be only book available in the public domain, though you can get some of the William books as audio books from Audible – very good for long drives when you want to keep the kids and adults enthralled.

Kidnapped is another book that I missed reading as a child, mostly because chapters from it seemed to find their way into various English readers, and at some stage I must have decided that I had read the book. The effort to read the book from end to end was well worth it, the story was excellent for a rainy day on a holiday by the sea when it was not possible to venture out, but reading this book still gave the day a salty flavour of the sea. However prolific RL Stevenson was, this book like his others is filled with the breathless joy of storytelling, its a boy or girls own adventure, with kidnappings, a battle, a shipwreck, a race through the Highlands of Scotland, and, I get tired thinking of the nearly ceaseless action!

David Balfour, an orphan at 17 sets off to claim his inheritance, and to get rid of him, his suitably evil uncle arranges his kidnapping and selling into slavery in the Americas. On the voyage out from Scotland, they pick up a ship wrecked Alan, a refugee rebel, and David finds a patron, or a hero. The ship itself is wrecked, and David then commences a journey through the badlands of a Scotland still seething with resentments and tribal enmities. I couldn’t get my head around this, but no doubt someone with an interest in British history might know the details. It’s not really necessary for the story, which now becomes a journey to freedom, complete with chases, rescues and other delightful hardships and escapades. There are really only two main characters in this book, David and Alan, and a host of skilfully imagined and drawn supporting characters enrich the imagination, and bring the story to life.

There is a bit of Scottish in there, but the author helpfully provides notes on the page, so it is not too intrusive. Altogether, a delightful escape, and good holiday travel reading. I made up my mind, again, that I must visit Scotland. Many of the place names are familiar, because, they are the names of other places, and what is best, with the book, is that there are maps of the voyage and journey that make it more exciting for me at least. A great project would be to follow this map, as a sea voyage and a tramp, without murderous sea captains, shipwrecks and marauding Campbells, of course.

Want something sharp, piquant and piercing to wake up after a lobotomy induced by too much TV, romantic comedies and happy clappy tales? Try a quick dose of Saki, that Edwardian writer who should be out of date, but still has the power to put us and our preconceptions on the spot till we wriggle uncomfortably when we recognise ourselves, or laugh out loud at ourselves and others. Abandon hope all ye who enter here, there is no remorse, nor apologies, no polite airbrushing, Saki doesn’t only not avoid these, he shines a cruel light into places that were better hidden, but he is always on the side of the underdog, whether child, governess or polecat-ferret.

Of course you have to take care, as Saki (H.H.Munro) stories can be erratic in their language and story development, and occasionally exceptionally brutal and unfeeling, though crafted as comedy they are frequently tragic.  But the occasional gems leave you gasping for air and refresh your worldview. I have a print compilation of all Saki’s short stories, but most of Saki’s work can be found online, as they are well out of copyright. The Chronicles of Clovis from Project Gutenberg’s site, contain three of his masterpieces:

Other stories that will leave you pleasantly elated are

One of the delights of Saki, is that the stories are so short and succinct that they can be strangely addictive. As a child of the Raj, he looks quizzically at the foibles and failings of the upper and middle classes, and delves enthusiastically into tales of beasts and reincarnations, strange gods and worse, familiar feelings subverted.

Burma or Myanmar being in the news lately, read an author who was born there, and returned to the Indian Imperial Police for a short time.  Reading his stories one can understand why the colonial stuffiness was not for him. All the more reason to enjoy the writings of this complex man, dead at 43 in the Great War, who definitely never reached an emotional age of more than 16, whose sister destroyed all his personal papers so that we don’t know the details of their motherless, peripatetic childhood he only survived armed with his imagination and wit.

Lee is threatening to become a classic writer with this excellent book, don’t dismiss it as just more sci-fi for the geeks and nerds among us! Its themes are up there with Orwell, Dickens and the Book of Revelation, and the writing holds you in thrall until you finish.

The future imperfect is Orwellian in horror, and some scenes send shudders through your being. Jason Smith can be a future day Pip of Great Expectations, seeing his Great Expectations turn to something worse than nothing, and finding out things about his identity that are painful to the extreme. The d.mes of course are the mark of the beast, the ersatz copies with the heart of blackness that replaces the soul. From delightful assistants and entertaining digital avatars, they become monsters made to control us.

For technos among us, the reduction of hardware to lines of code is of already with us, if machines can be copied, perhaps so can humans. Thought provokingly, Lee does not let us get away with this mere delight in technology (like so many of Cory Doctorow’s writings tend to do). Lee’s themes attempt to grapple with the clash of technology and ethics and who has the right to determine the future.

That said, there are some glitches, characterisation can be better, so that we can understand why some characters do things erratically, out of character..for example, we don’t know how or why Jason agrees to enter the d.train, when he has had so many misgivings over it, and has obviously not seen the project plan..but that would be saying too much. On the other hand, there are people who can be (almost) recognised!

For a writer who thinks deeply and ethically, Lee has also blown away some people in the story, without the horror that should accompany the loss of human life. Some characters have little purpose except to advance the plot. But these are all minor issues, on the whole the book marks Lee’s steady advance, and gives readers a great exhilarating story as well.

Strictly speaking, this book is not in the public domain, but I think an ebook at a ridiculously low price, can be counted as free. I sincerely hope that people will buy the book to support new writers directly.